You are here: Home / Drunk Driving / Come Monday: The Beginning

[The cool thing about having a blog is that it gives you a place to tell a story, to get healing and to remember things that might otherwise be forgotten. I hope you stay with me this week as I remember the one who changed me and a friendship that was brighter than the sun.] 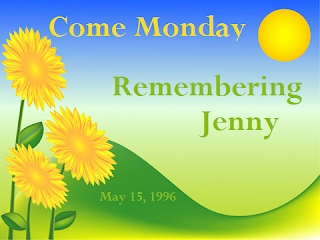 In September of 1992 my life changed for so many reasons but mostly it was the horrific Hurricane that hit S. Florida just days before I was supposed to leave for college.  While my house had not been significantly damaged, the home of my soon to be roommate Jenny’s was destroyed.

She didn’t want to leave her family to come to Flagler with us but when “move in” day arrived so did she with all of her belongings in black trash bags.  My Dad helped her mom and her carry all of her things into our two room suite. We picked our beds and as we unpacked we realized that we had chosen exactly the same “bed in a bag.” It was probably at that moment when our friendship was sealed and locked. 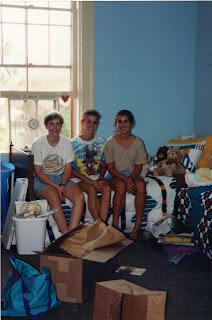 I have to be honest here. I am almost certain that my two goody two shoes roommates thought that this crazy Dead loving, hippie dressed chick was an absolute nut case.  (shh, don’t tell, but they were right.) But we all bonded so quickly that it was like the group of us had known each other forever.

As the year past, memories were made, our group became more solidified and Jenny and I began to develop what I would call my first “grown up” friendship. This wasn’t an easy task for me.  I am a pretty hard person to get to know. I don’t share easily, I tend to be a bit negative and due to some crappy childhood issues, I have a wall that is about 6 feet wide and 10 feet high between me and anyone who cares.

Jenny was the opposite of me.  She wore her heart on her sleeve. She cared about EVERYONE and I mean everyone.  Flagler is a small college and everywhere we would go, she would smile at someone and call them by name.  She was the epitome of what I wasn’t. I was too naive to envy her, I just loved her and the amazing unconditional friendship that she provided. 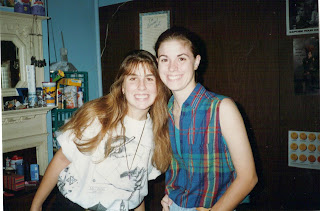 By the end of the year, we were pretty inseparable.  She went home for the summer to work at a summer camp but before that we rented the most darling little house on Loring Street that would be the setting of our sophomore year in college.

Chuck thinks he is a dog. He lays around like this

Checked out the new #Boba shop @zenginger.fl in St

My heart is so full!! 28 years of friendship with

Back to school ice cream treats while we wait for

This kid! I love finding his TikToks on my phone!