You are here: Home / friendship / Come Monday: The Night 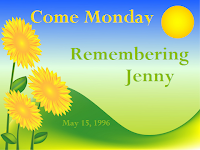 I hated teaching and I had applied to graduate school in hopes that I could figure out what I wanted to be when I grew up. The program that I applied to was very competitive. Only a handful of students were accepted and I honestly didn’t think that I would be one of them.

The big yellow envelop was sitting on the table and the words, “Welcome” were printed clearly in the first sentence. After a celebratory hug with my Dad, I bounded up the stairs to call Jenny.  I was so excited.  I know that I rattled on and on about my acceptance for a few minutes before she told me about her day. They had gone to the beach and boating. Seen some dolphins super close to their boat and stolen (yes stolen) a trap full of lobsters (or maybe they were crabs) which they were going to cook for dinner.  Our call ended with “ok, I will call you later.”

Sometime late that night my phone rang, I had been sleeping and my immediate thought was “who is calling me so late?”  I picked up the phone, I heard a familiar voice and all she kept sayings was, “she is dead, she is dead, Jenny is dead.” I remember not understanding, not comprehending. I am not sure how many minutes passed or even if I said anything at all. But I do have a clear memory of hearing one of our guy friends scream out and kick a chair.

I remember thinking…”she said she would call me later” and then I must have let out a piercing scream because the next thing I know my Dad and step mom were standing in my room just staring at me.

The rest is kind of a blurr… we hung up, but calls were made all night, and despite the fact that I tried to get into my car and make the 4 hour drive to St. A, my Dad was smarter and booked me a flight for the morning.

I got into the shower and I just cried and cried until the water grew cold. Got out and climbed into bed and wept.

I would learn later that evening that the accident was caused by an intoxicated (drugs & alcohol) driver.