You are here: Home / Family / Fun in the Sun at Legoland Florida

My son is a Lego addict and I don’t use that term lightly. He truly loves Legos and will spend hours making some new crazy creation. He has great focus and design skills. Not to mention all his mini-people that he uses to “play” with his Lego creations.

Needless to say, when we were planning our summer vacation, I was really interested in making Legoland part of plans. Trying to seem like this was a family decision, I laid out all of our options but was secretly hoping he would pick Legoland. I mean he always comments on the ads in his Lego Magazine. Well, it was a no brainer. He looked at me like I had two heads when I said we didn’t have to go to Legoland if he didn’t want.

There was great anticipation for our visit to Legoland. What would they have there? What kind of rides? What kind of Legos? We learned about their mini figure trading program but Eph was having no part of that. He loves his minifigures, even the nameless faceless ones. Eph scoured the website learning about the park.

Legoland Florida is located about 45 minutes south of Orlando in Winter Haven, Florida. It was a really quick drive from our condo. We arrived around noon. There is a huge entrance way welcoming you to the park. There were no lines to purchase tickets and we breezed right in.  We were given two adult vouchers to visit the park and since my Dad was with us, we were able to use the Buy One Adult Get One Child in Free coupon from our Lego Magazine and a $5.00 off Entertainment book coupon for our other child. Which was a nice savings off the regular priced tickets.*

Immediately when you walk into the park, you are greeted by a huge Lego creation water spraying dinosaur. The kids spent about 10 minutes playing there and taking pictures while my Dad spent those 10 minutes marveling at the engineering behind the designs.

It only gets better from there. The park is nestled on the grounds of the old Cypress Gardens (I have such fond memories of going there as a child with my grandparents) and is filled with beautiful old trees and flowers. There is a significant amount of shade to block the powerful sun. Plus there is a plethora of recycled milk bottle park benches on which to rest. (My Dad also marveled at these. I am surprised he didn’t try to buy one.)

As you make your way through down the first path into Fun Town, you come to a one of a kind two-story carousel in the middle of the park. The fun part of this ride is the horses are oversized Lego pieces. My kids immediately ran to the 2nd story and loved riding these giant Lego pieces. 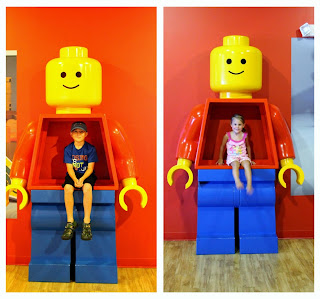 From Fun Town you can see the entrance to the Duplo Farm and Lego Kingdom. I convinced the kids to start on the other side around because I knew that it would be difficult to get Lu out of the Duplo play areas and I didn’t want a fit on my hands.

Next we walked down the path to Miniland USA. To say the Miniland Lego Displays are impressive really does not do it justice. It is really an engineering masterpiece. There are Lego buildings of all the major parts of the USA. My personal favorites were the fort in St. Augustine (we had just been there the day before) and Flagler College. Eph loved the space shuttle and Lu liked all the pieces that moved. Chris was entranced with the model of Grand Central Station and my Dad was just enthralled with the entire place. It really is amazing. I can’t imagine the hours and hours it takes to design and build these structures.

After our short walk through Miniland (we went back later in the day), we headed over to Lego Technic and the Imagination zone. They have several rooms (with air conditioning) where you can just go in and build different Lego creations. We built a Lego Hero and a Lego Car. The kids loved creating and testing their own creations.  After that we headed out to Technic and road some of the rides. Chris convinced Eph to ride his first roller coaster by bribing him with a new minifigure. He survived but he didn’t love it. I loved that Lu was tall enough for almost every ride.
﻿

Next on the agenda was Lego City. Which was great! Eph has almost all the Lego City sets and believe me the similarities were not lost on him. Both the kids got to get their drivers licenses and practice their driving skills. They have a small track for ages 3-5 and the kids actually can drive the cars themselves. It was so funny and I have to say that I am pretty sure working on the ride is a punishment for those workers. Lu couldn’t drive her car at all and kept stalling and crashing. Eph on the other hand L-O-V-E-D the experience. They have stop signs and are taught hand signals. He breezed through a red light twice but thought that was hysterical. We also took a spin on the boats.

Following that we headed over to the Land of Adventure where once again Chris managed to bribe Eph into riding the Costersaurus while my Dad, Lu and I relaxed under one of those fantastic old trees. We also took a spin on the Safari Trek and the Beetle Bounce. Lu thought those were fantastic. The coolest part of all the rides is all the Lego creations. I will say that even though she was big enough Lu was very scared on the Lost Kingdom Adventure and hid and cried the whole ride.

We didn’t want to miss the Pirate Show so we headed back over to Pirates Cove. Unfortunately, just as the ski show was getting started, a typical afternoon storm starting rolling in and they had to cancel. It was really a bummer. With the wind picking up and fearing a total downpour we opted to stop for a snack and a little rest at the Lakeside Sandwich shop. The kids got fruit cups, baked chips and milk. The restaurants were very clean with plenty of seating and air conditioning.

After a check in with our Iphone weather maps, we headed back out to finish the park before it closed at 8:00pm. I have to be real honest here, after having an amazing day, we were very disappointed to find that all the activities and rides were still closed due to the potential storm (it never rained that day). However, all the pay for activities and carts remained open.  We debated leaving but instead spent more time wandering around Miniland USA and playing in the Duplo Village.

The biggest frustration was that when I tried speaking to some of the park employees to see if they had any idea if the park would reopen the rides, they were less than helpful. No one could give me any idea as to whether we should just pack up and leave or wait it out. It had never rained, even though it definitely looked threatening and my kids really wanted to ride those last few rides. I do understand the need for safety but it would be nice if the employees were friendly and had updated information.

Finally, just as we were getting ready to call it quits (it was almost 7:30) the Carousel came to life. Knowing we were short on time, we quickly ran back to “the castle” and jumped on the last few rides. Eph really enjoyed the Royal Joust (Lu was underage for this one) and Merlin’s Adventure.

Overall, We were more than impressed with Legoland Florida. Boy or girl, Lego addict or not, Legoland is a wonderful amusement park for all ages. If you are heading to Orlando, don’t miss this brand new attraction.

*Life cereal is currently running a promotion for the buy one adult get one child in free tickets. We had cut a couple out and gave them to a family in line.*