My son is an avid soccer player. He has been playing since he was just three years old and truly has a heart for the game. For the past two years he has played for a “club” team, which means it is a bit more challenging than the typical recreational teams. We love our club, players and coaches, they are some of the best in the area. Due to our affiliation with a particular Club, he has mostly participated in their camps and skill building activities but it is never a bad idea to have other experiences, which is why I signed him up for the British Soccer Camp.

The British Soccer Camp program is a 5 day camp that has options for both half-day or in some cases full day programming. We chose a camp close to us that only had the 3 hour program. The camp is run by British soccer coaches that are “hosted” in the local area during the weeks of the camps. The Challenger website explains that all of their coaches have extensive training and various club level experiences in their own countries. Personally I was looking forward for Eph in having just a slightly different experience. 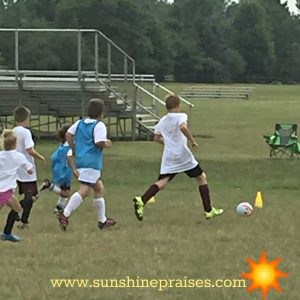 We were late to the first day of camp, so Eph was tad bit flustered. The camp was designed where the kids had drills and practice and then played games. There were only about 25 kids in camp and most of them were much younger than him. I think that was both a positive and negative. On one side, the coaches really enjoyed working with him and his advanced skills but on the other side, the game play wasn’t nearly as challenging as he is used too. However, he really does enjoy younger children and he said that he liked helping them learn to play his favorite game. 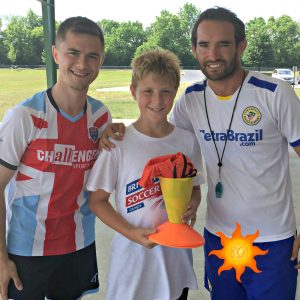 Overall, The Challenger Sports British Soccer Camp was a great experience for my soccer loving son. The coaches provided exemplary training for all the young players. The atmosphere was positive and encouraging which led to team play and individual success. I would highly recommend these camps for any child that enjoys soccer.

There are still camps happening around the country with spaces available. Check out their website for full details or make a note and plan on attending next summer.