This past Sunday, my son Ephraim had the opportunity to play a charity football game in The Ohio State Stadium – THE SHOE!  For my husband it was a dream come true.  He got to walk around the stadium, sit in the empty stands and dream about his own desire to also walk on this hallowed grass but for me it was my moment to dream. Would this, could this be only the first time that my sweet boy walks onto this field or is this just a step into his future?

I wasn’t sure at fice years old if Ephraim would really comprehend the magnitude of coolness that this opportunity presented for him.  However, as we stood in stands and watched him come around the corner for the first time, his eyes widened to an unprecedented size.  He has always grown up watching the Buckeyes, wearing the jersey and feeling the passion but for the first time he got to experience the wonder of being a football player in a large stadium. Not only a stadium but The Shoe.  The stadium that houses the best college football team in history.

As many know, Ephraim has ADHD.  His ADHD is the impulsive kind. He is the “didn’t mean to do it” kind of kid.  His brain is always about 2 steps behind his physical being. However, in his one hour debut as a football star he stood eagerly on the sidelines, waiting his turn.  He ran the length of the field trying to catch flags and when he had a chance to play Receiver he did so with an unmatched enthusiasm.

During half time he walked over to the fence and gave me the “thumbs up” sign and swigged his Gatorade.  At that moment, I had to dream a little more, that one day, while maybe not necessarily for the Buckeyes, but for some college sport, I will get to see Ephraim feel overwhelming success for his accomplishments, defeat the ADHD burden and become all he can be.

And in the mean time, I can still dream that one day I get to sit in The Shoe and watch him play in a full stadium wearing the Scarlett and Gray. 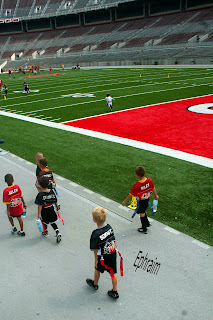 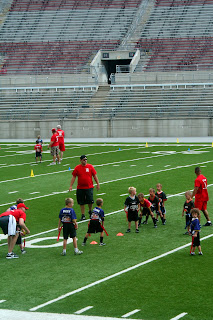 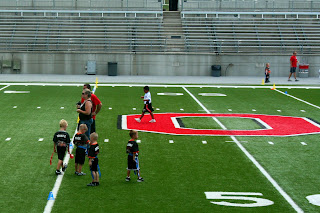