You are here: Home / christian / Paying {Praying}: Joy Comes in the Morning

As my husband and the children slept, I was making the last few turns over the necessary bridges, my heart eagerly awaiting the view. I hurried knowing that there were only a few precious minutes before the sun had made it’s full arrival on to the shore. As we parked, the children started to stir in their seats. I jostled them in an attempt to limit the exaggerated stretches that were sure to come after a 14 hour drive. I so desperately wanted to see the sun rise.

As we made our way from the parking lot, around the building, my son with eager anticipation, knowing what was in store on the other side, ran quickly up the wooden dock, his blond head blended softly with the rows of sea oats until I could not see him any longer. Lu, in her innocence ran after him (and me) as fast as her tiny feet could carry her until she reached the end of the dock. She stopped and froze. She stared down at the ground which had suddenly changed beneath her and hesitated. She looked up to me, as if to say, “what happened mama, why did the world change?“

For the last month of so, I have had this post half-way written. I have prayed over it, edited it and come back to it a hundred times. Then suddenly this morning I awoke with this exact picture of my daughter vividly in my head and the verse, “Joy comes in the morning” resounding as loud as trumpets and I felt just like Lu did in that moment and I knew exactly what it was that I had been wanting to say, what I have been needing to say, “Father, why did the world change?”


I have debated on how and when I would share my recent loss. We still haven’t even told family or many friends. It has been a long and trying month. I haven’t cried or prayed as much as I probably should have. I really haven’t even been as angry as I typically am. Instead I feel like I have just been numb, hidden, protected.

For his anger lasts only a moment

In early May, I had the “OMG, it is actually positive” little blue plus on a cheap pregnancy test [which I buy in bulk]. Two other home tests and two blood tests confirmed the unexpected and we were indeed pregnant.


As with any woman, who has experienced previous losses, there is no celebration, no joy, no relaxing until the first ultrasound.  Because we receive infertility treatments, we had our first ultrasound at 5 weeks and 2 days. This ultrasound  showed two small sacs, one that was clearly the appropriate size and one that was a tad smaller.  The doctor diagnosed a “twin pregnancy” – warned me not to tell anyone due to “vanishing twin syndrome” and sent me on my way with a congratulations and an appointment to see her the next week.

but his favor lasts a lifetime

At six weeks, 1 day, the doctor once again checked me. There were still two sacs but the one was still much smaller which indicated inappropriate growth and the second one was showing a fetal pole but nothing more. While I was a tad alarmed, the doctor told me that she would recheck me the next week (before our vacation) so that I would not have to worry about anything while we were away.


I continued my progesterone supplements, which significantly contribute to the “pregnancy” feelings like nausea, fatigue, and bloating.  I got a little pooch, stopped running and exercising, starting downing DHA and limiting my caffeine. During the first week, I really “felt pregnant.” That first week, I could barely get myself out of bed, I felt like I had the flu and I was so happy that I had all of those feelings. However, by the end of the second week, I was feeling better, not so tired and I began to worry.

weeping may remain for a night

On week 7, day 5, my doctors partner walked into the exam room and I casually announced that all my pregnancy symptoms had started to subside.  She told me not to worry and started the exam.  As soon as she turned the monitor it was clear that both babies had stopped developing.  At this point, you should clearly be able to see a small fetus, a heartbeat, two arms, two legs and in the one good sac their was nothing but emptiness. The second sac was still their but she suggested that it had already started to decompose.


Even though intuitively I knew something wasn’t quite right, I truly believed that the one baby was going to survive. To see both of them gone was breathtaking.  The doctor rattled off some choices, I tried to explain that we were leaving on vacation and then in a panic I just needed to get out of the office. I walked out of the infertility clinic to many down turned eyes and sweet words of support.

but rejoicing comes in the morning.

Once I got to my car, I sent my husband and a couple of good friends a message and then went to work. It was all very surreal. I couldn’t focus and I really just wanted to go home and hold each of my earthly babies and smell their sweet bodies.


The next day I had another confirmation ultrasound and we made the decision to have a D&C. I have great fears of natural miscarriage and all that it entails. I have friends who have gone that route, only to end up in the emergency room or having to have surgery. It is just not something I ever want to experience. The procedure went fine and I have been in the process of healing ever since.


I am not sure why God placed me on this particular patch of sinking sand but I do rest in the knowledge that he created every grain of sand and that he knows the path on which I walk.

For I know the plans I have for you,” declares the LORD, “plans to prosper you and not to harm you, plans to give you hope and a future (Jer 29:11) 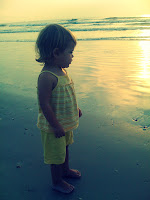 A friend asked me what we were going to do now and I am not sure. I have prayed so hard at this point, the prayers seemed answered and now they are not.  What I do know is that Lu didn’t stand frozen on that dock forever, nor did she run backwards to remain in the safety of the familiar. No, she simply reached up, trusting in her mother and walked forward. Not knowing what was to come but knowing that if I was there, she was safe.


And just like her, I need to reach up, look to the heavens and extend my trust to my heavenly Father. I need to walk out on to that sand, and know that I am safely in His reach.

When all around my soul gives way,
He then is all my Hope and Stay.
On Christ, the solid Rock, I stand;
all other ground is sinking sand.