You are here: Home / event / Praise & Giveaway: Growing Up & Doing It Yourself Prize Pack Featuring Thumbuddy to Love


WHAT? What was that last one?


That’s right, one of my big rules about child rearing was to make sure my baby didn’t end up walking around with a binky in his mouth at the age of 2 *gasp*.


Then guess what happened? I was tired, he was crying and that sparkly blue binky started calling me from the bottom of my neatly packed diaper bag.
I am sure the paci said something like this, “Hey new mom, feeling really tired? Want to get a little sleep? Come here, right over here, a little closer, I have something that will make your baby and you very very happy. That’s right momma, it’s ok, just reach down in the bag, pop open that little plastic box and pop it right there in the his little mouth. Don’t worry momma, he won’t go to kindergarten with it.”


And the rest is history.


Eph was a paci addict from day one. We had a paci “cup” in his crib, where we would store 10 (or more) pacifiers. Which he would remove one by one as the night progressed. Middle of the night scavenger hunts were common. Half asleep, crawling on the floor, hands and feet seeking out those tiny plastic Nuks. Hoping I could find at least one before he was completely awake. Putting one in each hand and one in the mouth before sneaking out of the room. The only saving grace with Eph was he gave up his pacifiers with very little fuss. Sometime around his 2nd birthday, he just lost interest and they slowly “vanished” one by one until the last was forgotten.


Now Lu, well, she was another story. You can read more about our paci “addiction” in my post “Ooh Ooh the Paci.” After our experience with Eph, I had once again vowed to never again give my kid a pacifier. That was until I realized that it wasn’t going to ruin her and it made rides in the car tolerable. The only problem with Lu was that she really became obsessed with her paci(s) and they weren’t the cute little pacifiers that most kids used. No, No. Lu was 100% addicted to those big giant Maggie Simpson hospital grade pacifiers. She had one (or 4 8) with her at all times and when she didn’t have one, EVERYONE knew it. She was miserable and so was mommy.

We tried everything and I mean everything. We went to the build an animal store and put the paci in and sewed it up. She cried and begged. I relented. We had a “bye bye binky” party. We packed up the binkies for another baby. We had them “vanish” in the middle of the night but all I ever got was more crying, more begging and more unhappiness. Then one day, she got hand, foot and mouth disease (I’m not kidding) and the paci didn’t bring such pleasure anymore, so I told Lu about the binky fairy and we put all her pacifiers in her bed at nap time and when she awoke they were gone. Poof, just like that, the pacifier sucking addiction was broken.


When I saw this fabulous product invented by a mom, I thought, WOW! Why didn’t I think of that? It could have helped solve my pacifier sucking problems with out the pain and struggles that we went through. Invented out of a need just like mine, Thumbuddy to Love is an PTPA and Mom’s Choice award winning product to that helps stop thumb and pacifier sucking in a positive manner. Plus it doesn’t include any harsh chemicals like nail polish. 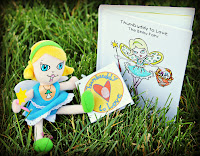 Even though we have been without a pacifier for several months, Lu will still ask about them occasionally. Especially when she sees pictures of herself with her collection of pacifiers. When we got the Thumbuddy to Love Binky Fairy in the mail, Lu immediately wanted to read the book and play with the puppet. I could tell that it brought some closure to her “is a binky fairy real” kind of thoughts. She and I sat outside, read the book, played with the puppet and talked about her old pacifiers. It was very sweet. She has been sleeping with the book and fairy ever since nap that day.

Thumbuddy to Love, along with several other great products (AquaDuck, Baby Dipper Bowl, 3R Cards Chore Chart &Antsy Pants) all made by moms are participating in a great giveaway over over at Mompact ($100 value). Enter to win on the Rafflecopter form below and make sure you stop by to support all these mom invented products. 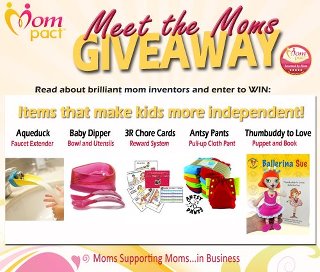 
Disclaimer: I received the Thumbuddy to Love product as part of my affiliation with Mompact in order to conduct this review. Regardless, I only post my honest opinions. This blog is in no way affiliated with Twitter, Facebook or any other social network.

That’s a wrap on our regular Season 7 with Islan

Little man and I enjoyed some #offthebeatenpath #F

That’s a wrap for our Junior High Large NHSCC 4t

It’s extremely hard to work when the kitten thin

Mila Blair aka Meebs is a super purrrer kitty. She

It’s been more than a year since he played. He d

Someone needs to tell Chuck that kitties can not w

So excited we found the Ox to the Limited Edition

Who else has cats that sit by the sink and demand

The exit doors are located on the right and left o

This cat! The universe knew that I needed him. He

Anyone out there know who ‘s artwork this is? I