You are here: Home / racing / Run Happy: Relay Around Columbus with The Ruby Red Runners

Sometime during the month of March, my friend Amy told me about a run her small group was training for called the Relay Around Columbus. Mesmerized by  the challenge, I convinced my friend Charlotte that this sounded like fun (if running for 24 hours is your idea of fun) and she and I set out to gather a group of six like minded women for our team.


Fortunately that wasn’t hard. The two of us seem to know a lot of crazy people and everyone we knew were just begging to join us (that is a lie, most people looked at us like we had two green heads). Within a week we had gathered our gaggle of gals, paid our registration fee and were ready to start training for the race of a lifetime.

I had only ever heard of relay races in the traditional baton passing sense. I didn’t realize that there is a whole running community that participates in these insane endurance races. For this race we were expected to run three legs each for a total of 105 miles in less than 24 hours. The race would take place in a mix of street and park paths and run continuously for 24 hours.
The first thing that our group did was determine our team name. We tossed out a whole variety of names and I even took a poll. We finally decided on the Ruby Red Runners – There’s No Place Like Home.

The race was based on miles and everyone ran around 17miles in three legs. We started out at 3:00 in about 90 degree weather. Our starter was Charlotte and once she was off, we drove to the next site and so on and so on. I had a great first leg. It was hot but I made good time. They have absolutely NO headphones/music/distraction rule so it was just me and my breathing. 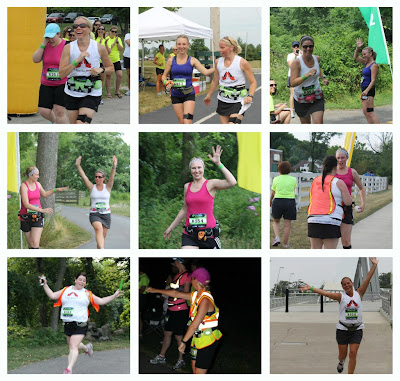 My second leg of the race started about 12:05am, in a park, in the PITCH BLACK. All I had was a head light and a glamorous reflector vests. We were also required to carry our phones with us at all times. We were fortunate to have been given six reflecting belts from SPI Belts to carry all our necessities. (Be on the look out for a great review of these fantastic belts.)


Running in the dark was strangely cool and frightening all at the same time. I couldn’t see more than a few inches in front of me and all I could think about was coming upon some wild animal (mainly skunks). The run was slow but smooth. I passed a few people here and there and everyone checked in with each other. Many teams had a “biker” that rode along next to them in the dark. I suspect to keep them from getting kidnapped or eaten by a puma (are there pumas in Ohio?). Our team was not that wise, so we just prayed.


After that second run, I was pooped. We were half way done, our team was pooping out and we had a couple of injuries. I tried to take a little snooze but there was so much noise from all the other cars and runners in the parking lot. Plus I was hot and getting eaten by mosquitoes and spiders. Did I mention that I paid for this? Regardless we were still having fun. Stinky, tired, exhausting fun. Kind of like Mardi Gras but with less booze and more running.


Sometime around 6:00am, I ran my last leg of the race. It was brutal but exhilarating. My legs were tired and did not understand why I was making them run without any sleep. My body was confused and my mind was barely functioning. I desperately wanted to use a non-porta john, brush the fuzz off my teeth and change my clothes but even with these challenges, I was able to run my last 5 miles in just over an hour. 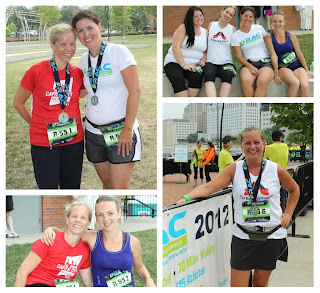 We dropped off our last runner a little before 10:00am, about 20 hours after we had started. Stacie, our ringer (she is super fast) made great time and closed out our race with an 8 mile run in about an hour and half. We finished in just over 22 hours.


As we saw her clear the last marker, heard our team announced, we gathered at the finish line to run the last 100 yards together as a T.E.A.M! The Ruby Red Runners had endured the Relay Around Columbus and the only thing left was to adorn ourselves in medals and take a final team photo. Truly this was an amazing experience and I can’t wait to do it again next year! 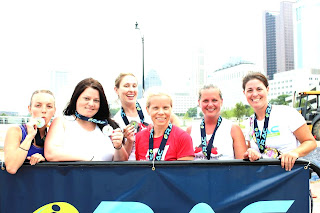 Disclaimer: This is not a paid or sponsored post. However, I do want to recognize the amazing planning team and volunteers that made the RAC successful. This was one of the most exciting and challenging experiences of my life.