If you haven’t done so already, check out my full post about Disney’s new Pixar film Inside Out. 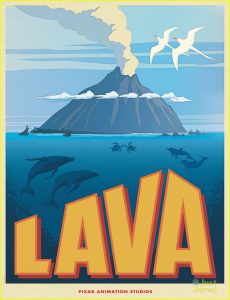 As always, Pixar didn’t disappoint with an opening treat of a new short flick, LAVA.

Lava is a stunningly illustrated story about two volcanoes destined to find each other in the vast open sea. It has a love song that will be immediately stuck on rotate in your head. Trust me, I had to hush my two kids from singing it out loud in the theater since we had seen the short film while at DisneySMMC.

Make sure you are not late to see Inside Out because you really don’t want to miss LAVA.

You are going to lava it.  (That will make more sense after you see the movie.)