You are here: Home / children / The Other Hot Car Danger: Tips for Protecting Your Child

You know those “It Happened to Me” stories that are often published in Parenting magazines? Sometimes they have tragic endings, sometimes the family was super fortunate. Either way, there always seems to be a lesson of warning that will lingers in your thoughts as well as that feeling of thank God it wasn’t us. Two years ago, we had one of those moments. Fortunately, it all turned out fine but there could have been a very tragic ending for my little girl.

Now, I am sure, upon first glance, you immediately thought that this post was going to be about leaving or forgetting a child strapped in their car seat in a hot car. You are expecting me to talk about the shoe or purse method but unfortunately for us, our hot car mishap occurred right under our noses, while we were at home doing everyday things.

It was a late July day. It was very hot. I was camped out in the recliner watching TV and nursing my newborn while my husband took care of yard work around the house. The big kids (then 4 and 8) were playing in the yard, running in and out of the house. Despite my new mom exhaustion, I was trying to keep one eye and one ear open for my little one. She was known to go visit neighbors without letting us know. I am not sure what triggered my internal alarm but I realized that I hadn’t heard her little voice in a good while. I called for her several times. No answer. I called for her brother and asked if he had seen her. He hadn’t. I sent him for my husband and he hadn’t seen her either. She was GONE. Not in the yard. Not in the neighbor’s yard. No where to be found.

By this time, I was in full panic mode. Did someone kidnap her? Was she in the pond down the street? Did she go into a neighbor’s house. We were frantically looking for her when something in our van caught my attention. There she was, all 30 lbs of her, slumped over the front of the steering wheel of the car. I screamed and tried to open the door. It was locked. She moved and looked at me. Her face was red and streaked with tears. I ran to the house to get the van keys and we had her out of the car in just a few seconds. 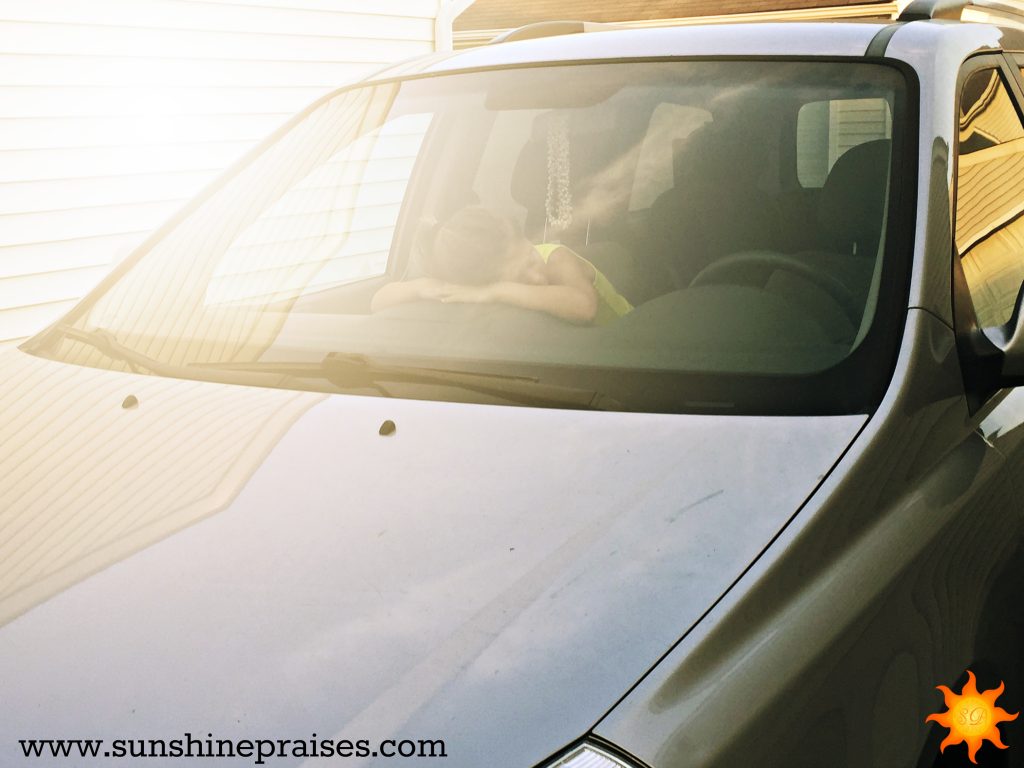 By the time she was rescued, she was crying frantically. She was blazing hot. Her face was beet red. We immediately took her into the house and worked on getting her cooled off while calling the emergency number to determine whether we should have her checked out at the hospital. Her temperature was high but not high enough to warrant a visit to the emergency room. We were told to keep our eyes on her and make sure that she did not show any signs of heat stroke (nausea, seizures, confusion).

I will absolutely never forget those 10 minutes of my life. The panic. The look of my daughters face still haunts me. The “what if” moments consumed me for a long time. I never in my life would have predicted this type of incident to happen in our family.

But it did and it could happen to yours too.

Here are some tips to help you avoid a similar situation: 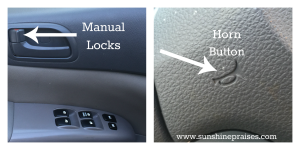 After the initial fear and trauma wore off, we learned that our daughter had entered the van through an unlocked driver’s side door. She had gotten into the car to retrieve a forgotten toy and upon entering, the front door closed behind her. She had climbed into the back to get the toy and then was unable to get back out. She said that she “pushed buttons” in the car which lead me to believe in her panic she had accidently locked the doors. She did not know about the car horn or how to manually unlock the car door. She essentially had no idea how to get out of the car.

Ever since that time, I have been diligent about making sure our children are familiar with the inside of a car. I want them to be able to get out if the need ever arises.

While this was a horribly scary experience, I hope that our story will encourage you to make changes to your car safety protocol. 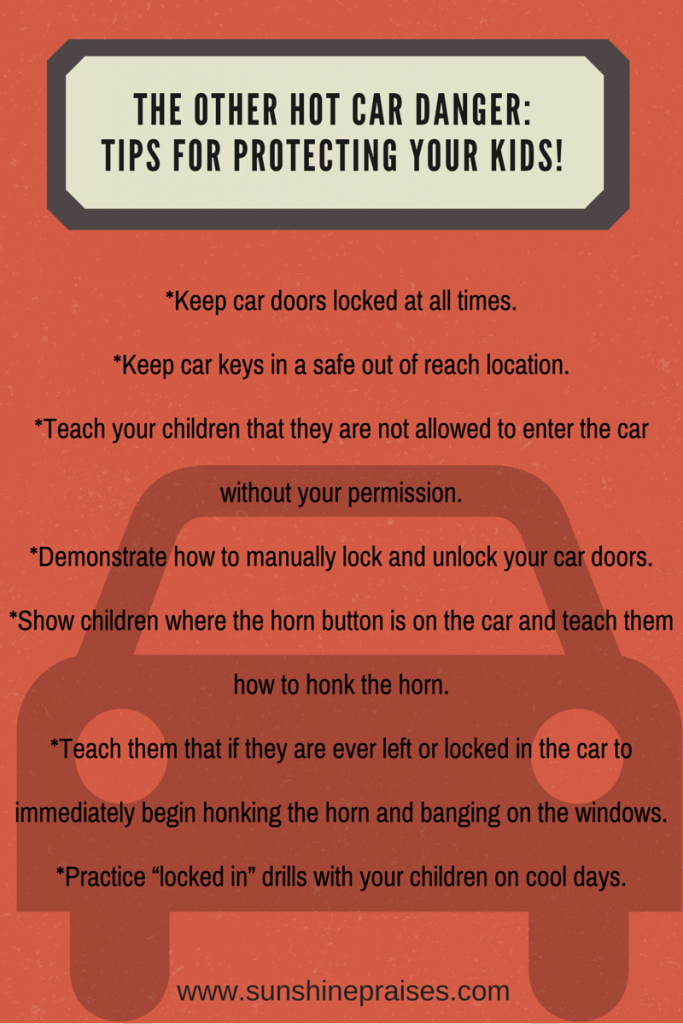