You are here: Home / Uncategorized / Movie Praise: Disney’s Beauty and the Beast #BeOurGuest

In our house Disney’s Beauty and the Beast is the most loved, most watched, most reenacted movie ever. It has fueled countless hours of dress-up, dancing and sing-a-longs and more costume replacements than even imaginable. It is THE pinnacle of our Disney movie collection. The cornerstone on which we hang all of our tiaras. As you can imagine, we had pretty high expectations heading into our preview last week. Could Disney really bring everything that makes Beauty and the Beast so magical to life?

And the answer is…

Yes, yes, yes and resounding, Belle singing at the top of her lungs YES! 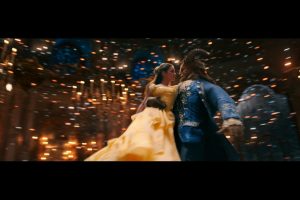 Beauty and the Beast Review

While I have yet to be disappointed in any of Disney’s attempts at bringing an animated classic to life, I definitely think that with each new film they are exceeding the expectations two fold.

First let’s chat about our bright little beauty Belle (Emma Watson). I am not going to lie, it took me till she was out of the village to really see her as anyone except Hermione. It was hard with such English cottage feel to it to see her outside of her infamous role. I had to blink a couple of times to remind myself who I was supposed to be watching. By the time Belle found herself on the top of hill over looking her little provincial town I had started to believe that she was in fact Belle.

Humble, beautiful and intelligent Belle plays her role beautifully. She is charming and sweet yet brave and confident at all the right moments. When you see her standing on the snow filled castle grounds or tending to her the Beast’s injured wounds, you can not separate the real from the digital imagery.

The Beast! Oh the please, please don’t kill the Beast! The song ruminates in my head has I write this. We had so many questions about the role of The Beast, played by Dan Stevens. Was he in a costume? Full make up? Are parts of it digitalized? He seems so real and in 3D that you will be tempted to reach out and touch him. His live action character seemed more gentle than the animated version. Maybe not as loud or frightening. It didn’t take away from his character but never the less, you will fall easily for him. Even though you know the out come when the towns people start chanting, your heart will race with fear.

Gaston. Hateable, laughable Gaston. I don’t like you! Hysterically played by Luke Evans, his live action counterpart is just as ridiculous and egotistical as the animated version. It is unimaginable that anyone could find themselves rooting for this bohunk. He is simply horrible. Which probably makes him so realistic. Evans did a great job portraying this unlikeable character.

The most magical part about Beauty & The Beast is all the enchanted characters. The digital imagery of the enchanted furniture is so very realistic. I struggled a bit wanting them to be a tad bit more like the animated movie and less “real” looking but of course that is just silly. They need to look like antiques that you would find in a completely run down castle.

Music! I love the original soundtrack and can sing every song. I had to keep reminding myself not to sing along. There are a few new songs that I am not sure I absolutely love but overall it is a stunning soundtrack.

I debated even talking about this. Is it really even worth being considered “controversial?” However as a faith based blogger, I felt I was doing my readers a disservice if I didn’t at least mention it. Then being trying to be the good blogger, I started to research a bit about Josh Gad and his roll as LeFou and you know what the most exciting thing I learned? Josh Gad and I graduated from the same freaking high school and he was also a Forensics team member. So then I was all side tracked trying to remember if I had ever known him or if he had siblings my age. I graduated 7 years earlier but it was a PreK3 to 12 school and sadly I didn’t find anything to connect us. I tell you all that because honestly, finding out that Josh Gad and are both U School alum is more exciting than any “controversy” that the media whipped up.

If there had never been one comment about LeFou being characterized as a gay man, you absolutely would have no idea. The character is no different than the one in the original animated film and I guarantee that even the most observant child will most likely overlook anything in the movie that might be considered controversial. As a matter of fact, when my 12 year old read about the “gay character,” he asked me who they were talking about and I responded with, “who do you think?” and he had no clue.

Who Should See Beauty & The Beast?

Everyone! I personally would recommend this film for ages 5+ due to the intense scenes and scary beast. If your child has seen the animated version, then I would explain that it will be the same but louder and more intense. Prepare them for the villagers attack and the fight between Gaston and The Beast. There is something different about seeing an animated death and a real person being shot or falling from a high tower. Even though, like other Disney movies, you don’t see the actual blood or injuries, if feels more “real.” The coyote scene is very realistic. Real dogs, bearing real teeth. It is dark and if you are young, even if you have seen the animated movie, you might not be able to recall what happens next. Even my daughter who has seen Beauty & The Beast a million times jumped and moved closer to me during a few scenes. So my parental suggestion is to know your kids, watch the animated film, talk about the scary parts and maybe during the movie, quick whispers to remind them that they already know what happens.

This Friday, April 7th, Beauty and the Beast will be releasing the Sing-Along version in approximately 1,200 theaters. Make sure you take your little performance loving kids to this get our seat version of the movie.

Follow Along with A Tale as Old As Time

Visit the official BEAUTY AND THE BEAST website here.

BEAUTY AND THE BEAST is now playing in theatres everywhere!